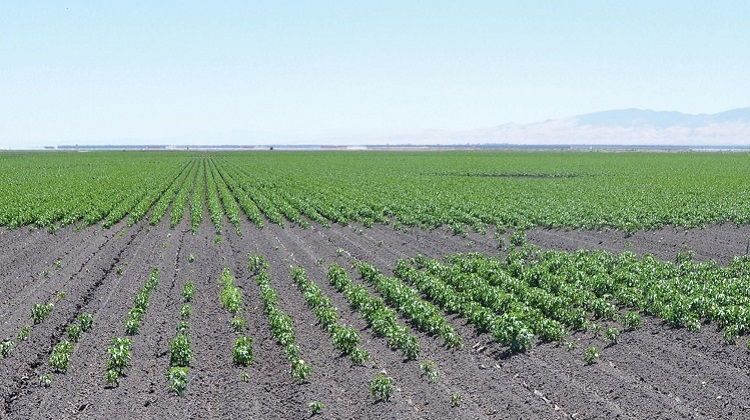 Fusarium oxysporum f. sp. vasinfectum (FOV) is a soil-inhabiting fungus. FOV spores germinate when in the proximity of host plant roots. The fungus spreads from roots to stems through xylem (water-conducting vascular tissue), produces spores (with spore quantity depending in part on plant susceptibility) and can partially plug up xylem so that plants cannot transpire water.

When infected, plants die of the disease, or infected live plants are shredded and turned under at season end. FOV colonizes dead tissue and survives on plant debris and in the soil. In addition to susceptible cotton varieties, FOV can survive on root surfaces and tissue of many weeds and other plant species. Spores can survive for years in the soil. FOV becomes a permanent soil resident once introduced and, essentially, cannot economically be eradicated through known chemical or biological treatments or crop rotations.

FOV can sustain itself on roots of many crops and weeds, but FOV races specific to cotton (such as Race 4 FOV) will not cause disease in other plant species.

FOV makes both short-lived conidia as well as long-lived, thick-walled spores (called chlamydospores) that can survive tough environmental conditions, including high heat and dehydration. Populations can be reduced gradually with desiccation and long-term sun/UV exposure occurring with tillage or weed-free fallow situations.

The best time to scout for FOV Race 4 is in the spring when cotton plants have 2-7 nodes. Definitely scout before first bloom.

“Blank” areas that are either devoid of plants or contain dying plants will be evident. The size of affected areas will depend on how long the inoculum has been accumulating and the susceptibility of the current variety and previously planted varieties. First-year infestations typically result in a few affected plants in a few feet of row. Second- and third-year infestations will leave expanded blank areas in adjacent rows and down the field as inoculum spreads.

Surviving plants and plants around periphery of “blank” areas will have wilted leaves, splotchy foliar chlorosis and/or necrosis, and nearly continuous, dark-brown vascular staining in the taproots.

Vascular staining is most evident in taproots. When evaluating vascular systems for staining, do not cut stems. Instead, uproot plants with a 5-to-8-inch section of taproot intact, then slice the roots lengthwise. Look for dark-brown vascular staining in roots.

Verticillium symptoms appear later in season, usually mid- to peak-bloom and later. Compared to FOV, Verticillium vascular staining is generally lighter in color, more discontinuous and usually evident in lower stems (2-to-6 inches above cotyledon node), as well as in taproot tissue.

Symptoms of all races of FOV look similar, so confirmation of Race 4 can only be made using a properly informed plant pathology laboratory that evaluates plant tissue from suspect plants. While techniques exist for evaluation of Race 4 FOV in soil, those tests are expensive, labor intensive and not currently a suitable method for evaluation of sites.

Once race 4 fov is confirmed

To the degree possible, destroy remaining infected plants in affected areas as well as immediate adjacent rows. That practice will help prevent inoculum buildup, and is particularly important if growing a susceptible cotton cultivar. Do not bury infected plants. Instead, pull up those plants and burn or compost them at high temperatures.

In fields identified with Race 4 FOV, plant only varieties with the highest levels of tolerance. Variety tolerance levels are identified in UC/USDA screening trials. Those trial results are posted on the University of California cotton website (http://cottoninfo.ucdavis.edu).

Infields considered to be absent of Race 4 FOV, continue to plant varieties with the desired quality and yield characteristics, but continue to scout for FOV disease symptoms.

Based on experience with other FOV races, rotating to nonhost crops or summer fallow will likely reduce inoculum survival (particularly multiyear rotations), but will not eradicate FOV. Upon replanting of susceptible cotton varieties, the disease will quickly return to damaging levels.

If affected area is small, consider:

FOV can spread through movement of infested soil, infested plant debris and infected seed. Researchers believe that much of the field-to-field, localized introduction of FOV-4 inoculum has occurred with practices that move soil.

Avoid any land applications of:

Seed producers should scout seed production fields for FOV Race 4. This scouting of seed fields is best done when plants are young (from 2-leaf through 7-leaf stage). To prevent the possibility of infected seed entering the production system, do not allow any seed production within, or next to, known infested fields.

California grower relies on technology and PhytoGen to thrive