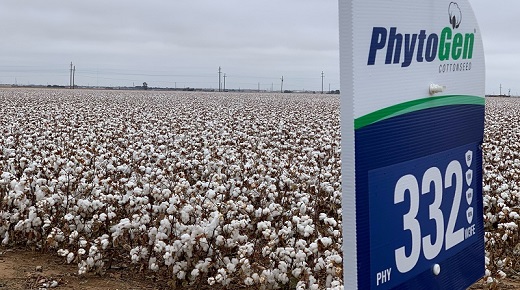 Proof in the data: New varieties on the rise in the Southwest

As Extension trial data rolls in and cotton prices remain strong, interest is rising in the latest cotton varieties with winning yields. Discover which varieties stand out in the Southwest.

Eyes are on cotton in early 2022 as commodity price and export demand remain strong. With the current market, many expect increased cotton acres where growers have the opportunity.

Producers are looking to last year’s university trials to determine which varieties they’ll plant to maximize yield and profitability. As yield data rolls in, several newer varieties keep rising to the top.

Ken Legé, Ph.D., cotton development specialist for PhytoGen in the Lubbock area, said PHY 411 W3FE is a new commercial variety that Southwest producers should take a close look at this season. It’s a midseason variety with a very broad adaptation that provides management flexibility with the Enlist® weed control system.

In addition to having high-yielding genetics, PHY 411 W3FE includes season-long yield protection with PhytoGen Breeding Traits™ for resistance to bacterial blight, root-knot nematodes and reniform nematodes. These traits allow plants to thrive against pests that lower production and eat away profits.

“PHY 411 W3FE is a great example of how our breeders bring together high-yielding germplasm with a suite of native and transgenic traits to allow producers to push varieties to their highest potential,” Legé said. 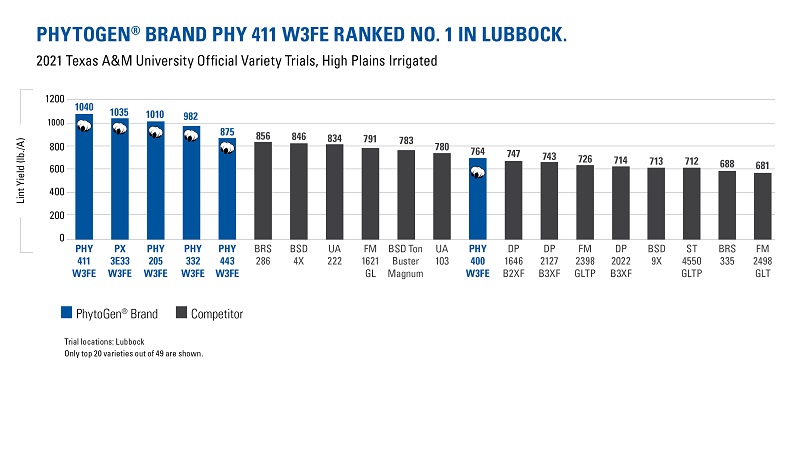 But Legé is quick to highlight that PhytoGen provides Lubbock-area producers choices when it comes to trial-winning varieties.

Wins across Texas and the Southwest

On the other side of the state, another PhytoGen brand variety keeps ringing the bell in the TAMU Replicated Agronomic Cotton Evaluation (RACE) trials. 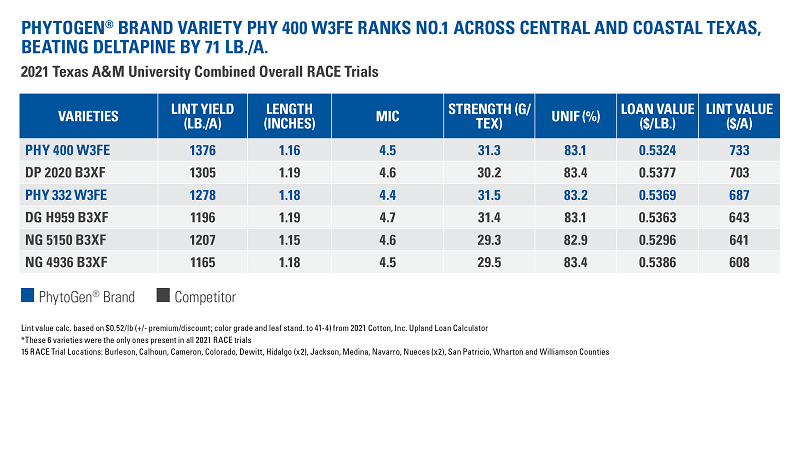 That’s not new territory for PHY 400 W3FE, as it also is the No. 1 variety in the TAMU combined Monster Cotton Variety Trials from 2019-21 in the Rio Grande Valley, Coastal Bend and Upper Gulf Coast. That data shows PHY 400 W3FE averaging 1,408 lb./A over three years and nine locations — with a 47 lb./A advantage over the closest competitor.

Brad Hopkins, Ph.D., is the PhytoGen cotton development specialist in the region, and he is not surprised at the continued wins in the RACE and Monster trials.

“PHY 400 W3FE, along with several other PhytoGen W3FE varieties, brings together the right package of yield, fiber quality and traits that Texas producers need to thrive,” Hopkins said. “You get early season vigor that establishes better stands, combined with an incredible ability to set and retain bolls. We’re seeing this pay off with a real yield advantage in university trials, as well as on customers’ farms.”

It’s not just Texas where these varieties are thriving. Legé said PHY 400 W3FE was also the No. 1 variety in the Oklahoma State University irrigated OVT at Fort Cobb. PHY 400 W3FE yielded 2,088 lb./A, outyielding the closest competitor by 119 lb./A. The top four varieties in the trial were PhytoGen commercial or experimental varieties, and all yielded more than 1 ton per acre.

This consistent performance, replicated across the Southwest over the last several years, has Legé excited about what lies ahead — especially going into a season with strong cotton prices and continued export demand.

“The proof is in these third party trials, and the word is traveling fast,” Legé said. “Producers want to capitalize on the opportunities this season, and we’re receiving calls every day about these new varieties. We’re excited to see producers thrive in Texas, Oklahoma and through the Southwest.”