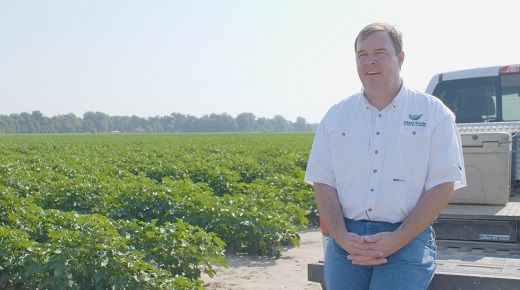 The heat and humidity wrap around you like a blanket you can’t shake off. Farm fields stretch out in long rows of cotton and soybeans. Two signs it’s summer in the Mississippi Delta.

For farmer Jeremy Jack, this is home.

“These are some of the best people in the world,” Jack says. His parents brought their farming acumen to the Delta to build a better life for their family. Since then, the family has developed a thriving business with Silent Shade Planting Company.

With family and the help of about 25 employees, Jack grows cotton, corn, soybeans and rice. The operation does its own fertilizer spreading, planting and spraying. Additionally, they operate their own trucking company and aerial application business. Everyone stays busy.

“We’re all working together to feed and clothe people, and that’s very important,” Jack says. “Also, we get to work with family and instill our work ethic in the next generation. We help them know where food and clothes come from. You don’t get to do all that in some industries.”

Jack continues to look for ways to improve and build upon how they’re producing crops. Through conservation tillage and other practices, they work to improve what they do and how they do it.

One way he does this is using the latest technology, including the Enlist® weed control system. Jack is growing Enlist® cotton for the third year and has added Enlist E3® soybeans for the first time this year.

Weed control is extremely important to Jack and is one reason he uses the Enlist system. Heavy weed pressure made it difficult to farm some fields. Palmer pigweed is the No. 1 issue because it grows quickly, and one plant can produce more than 400,000 seeds. By making Enlist® herbicides a cornerstone of his weed control program, Jack says they can control the tough weeds and take back their fields.

“One Palmer pigweed plant is one too many to miss,” Jack says. “We can lose so much yield if we can’t control the weeds. Once we start losing yield, we lose the ability to feed and clothe the world. We can’t afford to lose fields to weeds.”

Jack employs multiple herbicide modes of action to manage weeds and sustain new technologies. He starts by applying two residuals even before the crops are planted. After planting, he overlays a residual herbicide followed by an application of Enlist One® herbicide plus glufosinate. Jack likes the flexibility of the Enlist system. It gives him weed control options later in the season following residual herbicide applications.

On the second postemergence pass, Jack uses a tank mix of Enlist One and glyphosate. He can then go into a layby application with clean fields.

“We’re very excited about the Enlist technology,” Jack says. “We get amazing weed control with the Enlist system. When we spray Enlist One, we have confidence the product isn’t going to move around. It’s not going to come up later and go onto someone else’s ground.”

Being diligent with herbicide applications isn’t new to Jack and his applicators. They’ve had glyphosate-tolerant crops close to rice fields that aren’t tolerant.

For Jack and Silent Shade, following the label requirements is a priority. Before spraying any Enlist technology, all applicators must receive their private pesticide applicators licenses and attend auxin training. One person manages the sprayers, watching wind speed and direction during applications. The manager communicates with the applicators throughout the day about the weather and work orders.

“We have stopped spraying because the wind reached 12 MPH,” Jack says of his applicators observing the maximum wind speed regulation in the state of Mississippi. “We plan out our applications and make sure our employees have all the tools they need. Education and communication are key to weed control and a successful application.”

Jack flags all the fields of Enlist crops and communicates with his neighbors who have sweet potatoes and cotton without the Enlist trait nearby. He tells them when he will make herbicide applications.

“We can spray all day with Enlist herbicides,” Jack says. “But there’s a shortened window with dicamba. Time is much more crunched.”

Exceptional weed control and herbicides that stay on-target make the Enlist system stand out for Jack.

“I’d like to see more adoption of Enlist E3 soybeans,” Jack says. “We are concerned with potential drift from dicamba. We hope to get more people on the Enlist platform and help lower drift in this area.”