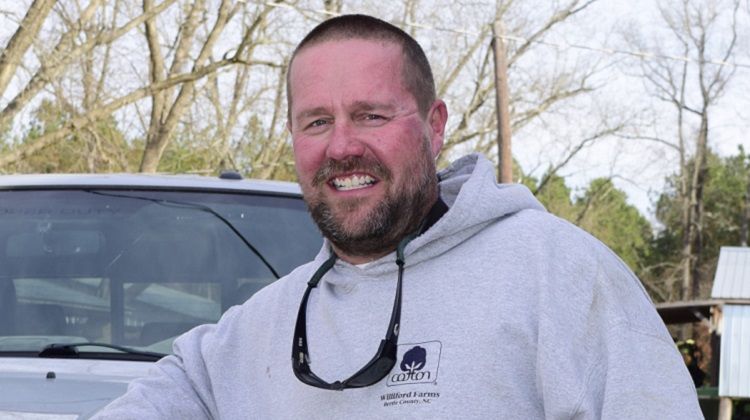 Grower says PhytoGen is 'the cotton for the Carolinas'

Last year’s cotton crop was among Kyle Williford’s best. Prior to 2017, however, herbicide-resistant weeds began limiting his yield potential. With tough-to-control pigweed taking over fields at Williford Farms, he had to make some changes.

“I got tired of pulling weeds. The pigweed was out of hand,” Williford says. “It was taking multiple sprays to knock them back, and we were still having to pull at least 20 percent of them.”

“PhytoGen fits our area best. It’s the cotton for the Carolinas,” he says. “The best years I’ve ever had have been growing PhytoGen varieties, and I have more confidence in them than any other cotton varieties.”

The Enlist weed control system offers a distinct advantage for his area, where peanuts fit into the crop rotation. “The technology works well for controlling our major weed issues, including Palmer amaranth and ragweed, and it protects our peanuts,” Williford says. “We plant peanuts between cotton fields and previously had problems with other weed control technologies.”

While worm pressure in Williford’s area is typically relatively low, pressure is rising each year and triggering insecticide treatments more often. WideStrike® 3 Insect Protection gave him peace of mind and lowered the number of insecticide applications on his farm.

“We had to spray every acre of a competing company’s cotton for bollworms in 2016, but WideStrike 3 limited our insect sprays in 2017,” he says.

While Williford was excited to lower his insecticide costs, the increased yield and fiber quality premiums helped his bottom line even more, especially on his dryland acres. “PHY 490 W3FE wasn’t as showy as the PHY 330 W3FE, but it performed very well on sand and yielded close to three bales per acre on average,” he says. “My sorriest sandy land picked more than 1,100 pounds of lint per acre.”

Williford also says PHY 330 W3FE performed well on tough ground, averaging 2.5 bales of lint per acre. “It was planted on some of my weaker land and it grew aggressively,” Williford says.

In addition to exceptional yields, Williford notes that fiber quality characteristics were better than competitive varieties. PhytoGen varieties produced an average micronaire of 4.5 to 4.6 and a staple length of 36 to 37. Strength and color also graded at a premium.

“I got at least a 2-cent premium on all bales, and I also had some 4-cent premiums,” Williford says.

With excellent yields, premium fiber quality and exceptional weed control, Williford is excited about 2018. He is booking PHY 490 W3FE for his sandy ground, with PHY 330 W3FE and PhytoGen® brand PHY 340 W3FE on his remaining cotton acreage. But he’s still enjoying the success from last season.

“In 2017, the weather was wonderful and it was our best year ever. With no hurricanes and timely rains, our cotton plants got off to a good start and never stopped growing,” he says. “2017 made up for the challenges of the previous two years.”