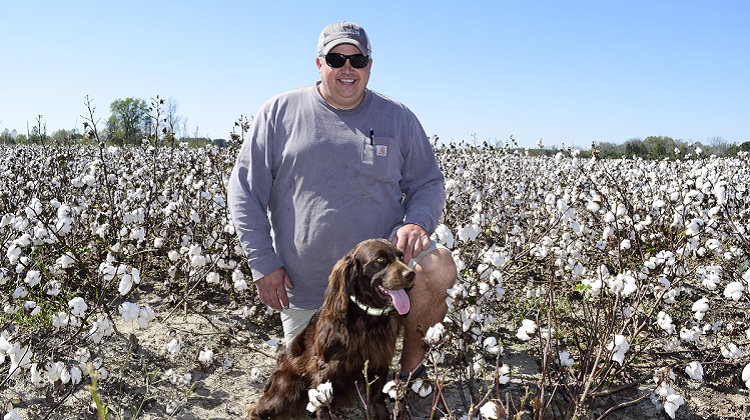 That’s not to say Sikes doesn’t have favorites. His proven and dependable core variety is PHY 444 WRF. “It’s just a good-yielding cotton variety, and it grades well,” he says. “It’s the best grading cotton around, with a really good micronaire. In 2016, our PHY 444 WRF averaged over two bales per acre and graded out a 4.0 micronaire with an average staple length of 40.”

PHY 444 WRF, he says, fits anywhere. “It’s all about good cotton. It’s done well in both our sandy soil and our heavier, stiffer soil. Last year, it even did well on our stiffer, rockier dirt,” Sikes says. “PHY 444 WRF fits everywhere on our farm and provides us with a 4- to 5-cent premium over base loan value because of the high-quality fiber.”

“The micronaire is in the premium range — it’s the only variety that I know of that can routinely do that around here — even in Bulloch County, which has tended to have a history of high micronaire,” he says. “In 2017, we picked up premiums for both micronaire and staple length. Other competing varieties may pick up a premium with staple, but then have a deduct with micronaire. At best, you are back to net zero.”

PhytoGen® brand varieties with the Enlist® cotton trait give growers more weed control options in one convenient system for better control of yield-robbing weeds. Tolerance to 2,4-D choline, glyphosate and glufosinate allow for in-crop herbicide applications so growers can fight back against hard-to-control and resistant weeds — including glyphosate-resistant Palmer amaranth.

“We fight horrible pigweed populations on our farm,” he says. “The 2,4-D choline seems to be a better solution than dicamba, especially with peanuts in rotation.”

Sikes is pleased with the performance of Enlist Duo® herbicide, a convenient blend of 2,4-D choline and glyphosate, and he’s really excited about the new Enlist One™ herbicide that he used on a trial basis in 2017. Enlist One is a straight-goods 2,4-D choline featuring Colex-D® technology. He calls the weed control activity of Enlist One tank mixed with glufosinate “unreal,” saying it provided complete control of even the toughest-to-kill weeds.

“You can’t mix glufosinate with dicamba. The combo of Enlist One and glufosinate is unbeatable for weed control,” Sikes says. “I’m really impressed with what it did. The convenience of being able to spray those two herbicides together was a huge time savings.”

“I’m still learning about the Enlist system, but I really like what I’m seeing thus far,” he says. “If I’m looking for control of tough-to-kill weeds, especially pigweed, I’m going with the Enlist system versus the competitor’s weed control system.”