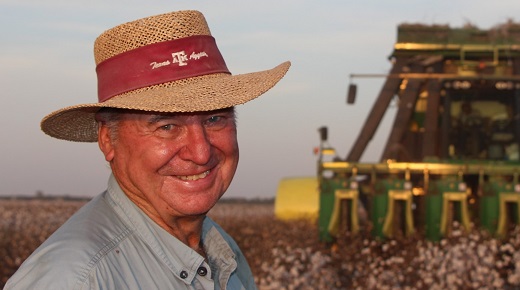 Cotton producers prevailed in 2021 against onslaught of winds and rains

The Upper Gulf Coast of Texas was inundated with unseasonable rains, tropical storms and a hurricane in 2021. Learn how these cotton producers thrived.

More than 250,000 acres of cotton are annually produced along the Upper Gulf Coast of Texas, typically only limited by unfavorable weather and tropical storms. Last year delivered all of that and more to area cotton farmers.

In 2021, Gary Schoenfield had 40 inches of in-season rain on his cotton crop outside El Campo, Texas. At 69, he’s seen his share of rain, but 2021 was unlike anything Schoenfield has seen since the 10 inches of standing water left from Hurricane Harvey.

“For this cotton to do this good getting that much rain, we’re pleased with it,” Schoenfield said.

Schoenfield, a Texas Aggie who farms cotton, corn and milo, began farming 45 years ago with his wife, Jeanette. He and Jeannette have six children who all graduated from Texas A&M. They now farm 2,200 acres of cotton with their three sons Eric, Neal and Jason, who all will carry on the multigenerational farming operation.

The Schoenfields began planting PhytoGen® cottonseed several years ago because it annually tops local Extension trials. Two of those varieties, PhytoGen brand PHY 332 W3FE and PHY 400 W3FE, are Schoenfield’s favorites. After the onslaught of rains in 2021 and sustaining losses from the storm that hit just as they began to harvest, he averaged 2.5 bales/acre on the better fields.

“We like varieties a little tighter in the burr with the winds we get here. We did OK with the 50-plus mph winds that blew through,” Gary Schoenfield said.

Schoenfield said PhytoGen is also easier to manage, and he doesn’t have to invest in as much plant growth regulator. He also credits his PhytoGen field team members for their cotton-growing expertise.

“I trust the agronomic recommendations of my sales representative to help anytime I have questions,” Schoenfield added. “He knows his cotton.”

Further up the Gulf Coast near Wharton, Texas, Josh Marek has been farming since 2007, growing PhytoGen cottonseed for most of those years. Marek farms about 1,000 acres of corn and 750 acres of cotton near the Colorado River. 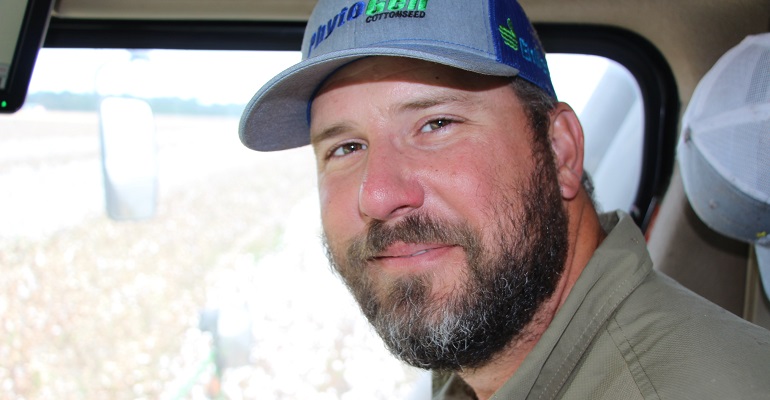 Wharton County, Texas, producer Josh Marek tends to plant early, so he needs cotton that can survive volatile weather all season long. Read about how he thrives along the Colorado River bottom.

“Half of the field was under water! I sat back and let the cotton do what it was going to do,” Marek said. “It was beat up, and then we had a hurricane just before harvest, so we picked more than a month late. But we still managed to pick a little over 2 bales to the acre.

“In both wet years and dry years, PhytoGen has held its own.”

PhytoGen brand PHY 390 W3FE yielded 2.5 bales/A on his dryland, but Marek said PhytoGen brand PHY 400 W3FE fared the best throughout the tough season. He added he had a 3-bale average last year so he knows what the varieties can do.

“PhytoGen is very durable and holds on — it gets back to growing. On my farm, PhytoGen has beaten the competition. And it’s consistent — it’s going to yield and grade and make good cotton.

Along the Gulf Coast, cotton producers like Marek tend to plant early, so they need cotton that can survive volatile weather even early on. Marek explained the early season vigor helps the young cotton grow through thrips and fleahoppers.

“The vigor is awesome!” he said. “In all these years planting PhytoGen, I’ve never had a stand issue.”

Marek uses both Enlist® herbicides and dicamba and thinks the Enlist herbicides are better at killing weeds.

“I always like to see the new things but, ultimately, I want to produce the best-quality cotton,” Marek said. “I don’t sell in a pool, so I’m looking for longer staple with good yield and a good insect package to protect that potential.”

To get more information on PhytoGen W3FE varieties bred for the Southwest, go to PhytoGen.com/Facts.