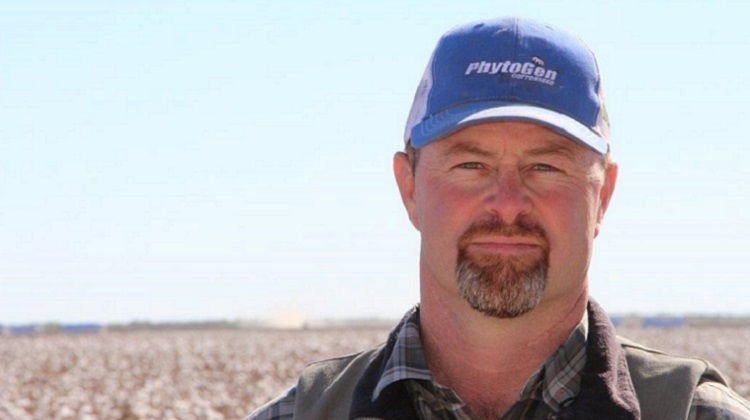 Anticipation of ‘best crop ever’ pays off for West Texas producers

Brady Weishuhn averaged between 3.5 and 4 bales per row acre in 2017 on his farm in Vancourt, Texas, with PhytoGen® brand PHY 444 WRF.

Dryland farming in West Texas can be challenging, particularly in the Concho Valley in the shadow of the Edwards Plateau. But in a region that typically gets about 20 inches of annual rain, 2017 was a good year for the Weishuhns with above-average rainfall.

“I don’t remember how long it’s been since our cotton has fruited like this,” Allen Weishuhn says. “It came out of the ground growing and fruited up right away. It was heavily loaded by Aug. 1 and had cotton all the way to the ground.”

Weishuhn has been farming since 1971 — this past year was his 46th crop. He says he just about quit growing cotton in the years he was bitterly fighting boll weevils. And he admits he’s pleased that technology has advanced to the point where producers can again successfully grow cotton.

Brady Weishuhn has been farming in partnership with his dad, Allen, since 1995 and has been growing PhytoGen® brand varieties for nearly a decade. Eight years ago he was impressed with the early season vigor, and he says varieties have only continued to improve and progress.

“We’ve stuck with PhytoGen because we know it can produce high yields and has great quality,” Brady says. He averaged between 3.5 and 4 bales per row acre in 2017. He’s quick to add they were very fortunate to get good rain across their dryland, skip-row operation in 2017, enabling the cotton to fruit up well.

“The cotton never slowed down,” he says. “It had a lower crop, a middle crop and a top crop. It’s the best crop we’ve ever had — and we’ve seen some good yields with PhytoGen — but not as universally across the whole farm like we did this year.”

The grades were excellent, too, going into loan as high as 53 and 54 cents.

Brady planted PhytoGen brand varieties PHY 444 WRF, PHY 339 WRF and PHY 417 WRF, rotating in PHY 490 W3FE on his heaviest weed-invested fields. He had a test plot with several other W3FE varieties and is still debating what to add to his operation in 2018. Although they don’t have many resistant weeds on the farm, the Weishuhns do have several weed species that are hard to kill with glyphosate.

“We don’t have much resistance, but Enlist Duo smoked the weeds and cleaned up everything,” Brady says. “I saw firsthand what Enlist Duo will do in our burndown program. We try to take care of weeds prior to planting and start clean.

“The Enlist system sure works,” he added, mentioning that the Enlist® weed control system gave him peace of mind that weeds were under control while the PhytoGen brand varieties were loading up.

So what was his biggest challenge in 2017?

“Our biggest issue was figuring out where to put all the modules,” Brady quips, with a grin.